SPSS Analysis Help: Your Guide for When SPSS Seems too Complicated

SPSS is a great piece of software that allows you to conduct virtually every single statistical procedure known to men. The uses of SPSS are truly endless, and are extremely extensible due to the powerful syntax engine that allows to go beyond the procedures that come already in the graphical interface menus. Using syntax, a power user can define variables, manipulate all the SPSS objects (outputs, etc), use logical loops and mostly everything that a programming basic language provides.

The meaning of SPSS is "Statistical Package for the Social Sciences", but such original definition/name does not make justice for this great piece of software, considering that its reach goes way beyond merely Social Sciences. SPSS is used in Engineering, Biological sciences, Medical Sciences, Psychology, etc. It is indeed a general purpose software package.

Why I Need to Use Syntax in SPSS

Well, you don't HAVE to use syntax, but it can be convenient sometimes to use syntax because it can make your life much easier, or you simply may need to be forced syntax because you cannot do the procedure you need to conduct otherwise using menus. Why is that? Because there are some potential types of procedures that can be conducted, with different types of models, types of sums of squares (like the case of the General Linear Model), that it can be impractical to include all of them in the menus included in the graphical interface. It is a balancing act for the developers of SPSS to include menus for the most common procedures (such as t-tests, z-test, ANOVA, linear regression, non-parametric tests, etc).

There are cases where you may need to use syntax. A concrete example: assume that you have a survey with 1000 questions, and you need to label the variables "Question1", "Question2", ..., and so on, and say that the variable names are not included in a spreadsheet, and you mandatorily need to type out those 1000 variables. Will you type them, one by one? Don't think so. You will take hours doing something that contributes nothing to your statistical understanding nor to the analysis itself. Using syntax, you can use a FOR cycle and three lines of code and then in 20 seconds you have those 1000 variable names defined. What would you prefer, to spend hours or a few seconds conducting a tedious, inconsequential task? 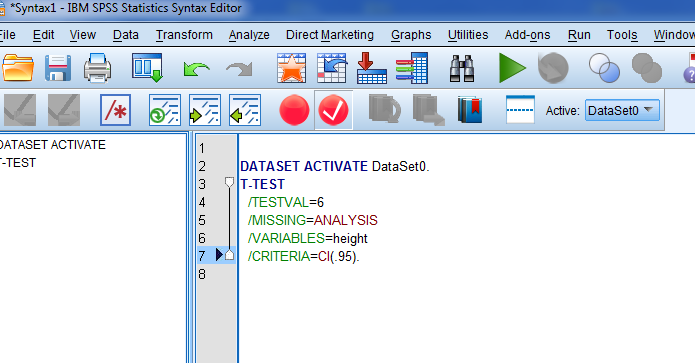 The most basic SPSS analyses include the one-population and two-population z-tests and t-tests, to compare population means and proportions. Also we have Analysis of Variance (ANOVA), in its One-Way or Factorial Forms. And we also have regression. All these analyses can be conducted easily and with lots of flexibility using the SPSS menus, so you don't need to use syntax, if you don't want to use. Some people will make a case of doing everything with syntax, but that could be too extreme. I think practicality is a good option, and you can use menus if they are available for what you need to do, and for you doing it using the graphical interface menus is faster than doing it with syntax.

Other types of analyses are also included in SPSS, but they are less common. Those include the non-parametric test, dimension reduction, mixed model, generalized linear models, etc. SPSS can handle really advanced models, and for the most part, it is quite utilized because it is mostly used for basic t-tests, regressions and ANOVA, but it has a LOT of underutilized power under the hood.


Submit your SPSS problems for a Free Quote and we will be back shortly (a couple of hours max). It costs you NOTHING to find out how much it would cost to solve your problems.

Our team is highly experienced in SPSS work, both with the GUI menus and syntax (indeed, what most people don't know is that most of the power of SPSS is in what can be done with syntax and CANNOT be done through the menus most people use. You can Request your Free Quote. We a have a satisfaction guarantee policy: If you're not satisfied, we'll just refund you. Please see our terms of service for more information about this policy.

Why we can help with your SPSS Analyses?

We can do handle all types of statistics analyses/homework/questions that require the use of SPSS, through menus or syntax

We provide detailed reports, carefully observing the specified requirements for the job.

We strive to provide the best possible prices for our services

We take pride of our work

Our tutors take pride on the work we do. We diligently do work for our customers, and put great attention to details striving to always provide a great final product

Prices start at $35 per hour, depending on the complexity of the work and the turnaround time

You can e-mail us your SPSS analysis questions for a free quote.