SPSS is one the leading statistical software in the world. It provides powerful data analysis tools, which are indispensable for professionals in many different areas. SPSS is required at many universities, and it is for most part the standard for data analysis in several fields.

We offer professional assistance in several topics. We have assisted hundred of clients with their homework, dissertation, etc.

Submit your SPSS projects to us for a free quote and we will be back shortly with a estimate of the cost. It costs you NOTHING to find out how much it would be to solve your problems. See a sample of our work.

With our help, you'll get that extra edge you need! Don't hesitate contact us and we'll provide you with professional SPSS help. Either for simple problems or for dissertation help with SPSS, we can assist you providing you an accurate and clear interpretation of those SPSS outputs. The information we provide will give you hints on how to learn SPSS

E-mail your SPSS problems
for a free quote
Contact Us!

Why we can help with your SPSS projects?

We have been online for more than 10 years, we have worked with thousands of customers who have been able to appreciate the quality of our work

SPSS is a software package that demands technical knowledge of both the software itself and the technical statistical aspects involved in the procedures. Our tutors are the right experts to help you with your homework or anything academic related with SPSS projects or assignments

Our tutors provide detailed, step-by-step solutions, and we put a lot of care in double checking our calculations

You can e-mail us your problems 24x7. We will send a free quote ASAP

We take pride of our work

We do our work with care. We are experts and we take pride in what we do. Our main objective is our customers' complete satisfaction. We take great care in paying attention to all the requirements and details, with the purpose of fulfilling work of the highest quality

Prices start at $35 per hour, depending on the complexity of the work and the turnaround time

You can e-mail us your problems for a free quote.

Analyze the data using the methods of this chapter (ANOVA).

· Based on the results, does it appear that there is sufficient evidence to support the claim that the drug lowers pulse rate?

· Are there any serious problems with the design of the experiment?

· Given that only males were involved in the experiment do the results also apply to females?

· The project manager compared the post treatment pulse rates to the mean pulse rate for adult males. Is there a better way to measure the drug’s effectiveness in lowering pulse rates?

· How would you characterize the overall validity of the experiment?

· Based on the available results, should the drug be approved?

Solution: (a) We need to test the following hypotheses:

We perform an ANOVA analysis with the aid of SPSS. The results are shown below:

(b) The design doesn't seem to have any serious problem, other than it was applied only to men. If the test was meant to be valid for both men and women, then the design is flawed.

In terms of the assumption for ANOVA, the homogeneity of variance is satisfied as shown in the following table:

The p-value of the test is p = 0.457, which means that we fail to reject the null hypothesis of equal variances.

(c) The results don’t apply to women, since only men participated in the experiment.

(f) The drug shouldn’t be approved because it doesn’t seem to have a significant effect on the pulse. Besides, since the experiment had only male participants, the conclusions are biased towards one gender.

Problem 2: The VP of HR at the large software company in your region is concerned that the company is not doing enough to recognize generational differences with their employees. She is concerned that younger generations of employees are less satisfied than older generations and, what’s more, that the age-old strategy of paying employees more to increase their satisfaction isn’t working as well with the younger group.

You have been hired by the VP to dig deeper into these issues of generational differences, job satisfaction, and the satisfaction involved with higher income. Working with the dataset labeled “P 6_generational-job-sat”, analyze and interpret the main effects and interaction effects of generation (age category or ‘age_bin’, indicating this is a binary variable) and income (income category or ‘inccat’) on job satisfaction (‘jobsat’). (*Note: both independent variables are measured as categorical variables for all analysis purposes).

For full credit, your answer should include the following parts:

Solution: For the sake of the analysis, we will use Job Satisfaction as an interval variable in spite of the fact that it is defined as an ordinal variable. With that assumption in mind, a Two-Way ANOVA will be performed with JobSat as the dependent variable and Age_bin and IncCat as the factors.

The assumption of homogeneity of variances is not met, p = 0.000.

The following ANOVA results are obtained: 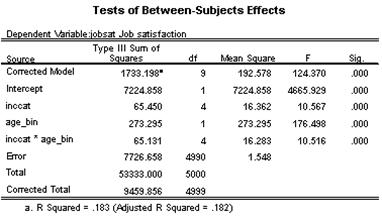 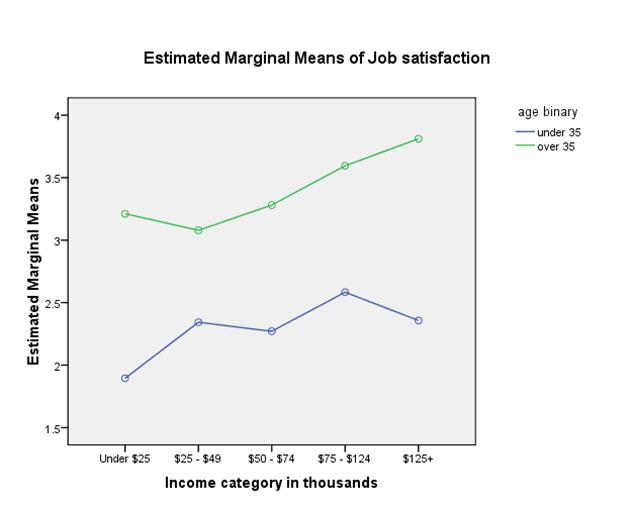 E-mail your SPSS problems
for a free quote

How to interpret SPSS cross-tabulations. Check this article out.

Another case study of how to use SPSS for multiple regression analyses.

Do you know how to use SPSS for non-parametric tests? Check it out!.

Check out how to use SPSS to deal with a descriptive statistics problem.

Follow this Steps to conduct a paired-samples t-test with SPSS.

A fully worked example of using SPSS to run a logistic regression analysis.

SPSS can also help you with some easier procedures such as one-sample hypothesis tests.

One of the key assumptions in regression analysis to get valid results is independence of errors. Check out to deal with multicollinearity in SPSS.

One of the most common basic Stats analysis you can conduct with SPSS is a One-Way ANOVA with post-hoc analysis.

Do not go alone when you need conduct some SPSS analysis.

So I have a SPSS assignment that I am struggling with, where do I go from here

Your options to find SPSS homework help, even with a presential or an online tutor.

Check out this multiple regression case study with SPSS.

Learn how to do regresion and ANOVA with SPSS.

Looking for Statistics Help with SPSS, look no further.

Learn how to conduct a Two-Way ANOVA analysis, with the aid of SPSS, step-by-step.

All the procedures for a linear regression analysis with SPSS.